A major auto accident Friday afternoon involving 47 vehicles resulted in I-75 southbound lanes being closed for 6 hours and dozens of people were injured and taken to area hospitals. 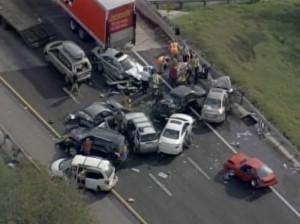 Although dozens were injured in the massive pile-up no one was killed in the accident. Florida highway patrol announced that the crash involved 47 vehicles and 52 people injured. Of those injured in the wreck 22 were taken to area hospitals for medical treatment. Two people were with critical injuries and flown to medical centers for serious injuries.

The chain-reaction of crashes began during heavy rain shortly after 3 p.m. on the southbound lanes on I-75 at the University Parkway Overpass. FHP troopers also noted that while the weather was definitely a contributing factor, there will be charges of careless driving filed for some involved.

While as of Saturday morning it still remains unclear of the exact timeline of events, due to the weather, the accident apparently occurred at speeds between 50 – 65 miles per hour – far slower than normal highway traffic. 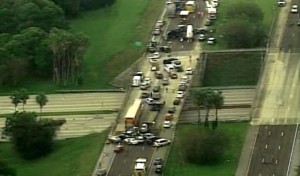 In addition to passenger vehicles there were also several commercial trucks including two tractor-trailers involved in the crash. Witnesses to the crash said the heavy downpour of rain seemed to come out of nowhere on an otherwise clear afternoon. Medical authorities at the scene told area news reporters that with so many vehicles and people involved and at the speeds of the accident it was miraculous that no one was killed in the crash.

Troopers reported that of the commercial vehicles involved in the crash that none were contained any harmful or toxic substances.

The massive crash drew emergency response crews from multiple agencies in Sarasota and Manatee Counties, with more than 18 units being sent from the Sarasota county fire department alone.

Many of the injured went to Lakewood Ranch Medical Center and received treatment for broken bones, lacerations from broken glass and even burns from airbags deployed in the crash.

The scene after the crash was one of complete chaos with broken glass and smashed vehicle parts scattered across the road way, tractor trailer trucks were jack-knifed and smashed, broker cars were scattered haphazardly in all directions leading up to the overpass. Traffic was backed up for many miles and Friday rush-hour traffic was detoured from State Road 70 to Fruitville Rd.

Area news agencies interviewed witnesses involved in the accident and one vicitm had this to say, “In the moment before we crashed I said to my wife, ‘ we are going to crash! the is no way to stop!’ the next thing we knew the airbag was in my face”.

Another witness described the beginning of the accident  “It seemed like forever, all you could hear was crash, crash, crash just none stop. I have never seen anything like that before”

Further details of the accident are pending from the Florida Highway Patrol.