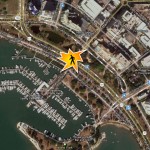 Late Saturday night a car struck and injured two pedestrians while they attempted to cross Tamiami Trail at Main Street.

The accident occurred around 11:30 in Saturday Evening. Authorities are investigating the driver and eye witness accounts.

Emergency Medical Services took one of the injured men to Blake Medical Center and the other one to Sarasota Memorial for treatment.

No further details are yet available.