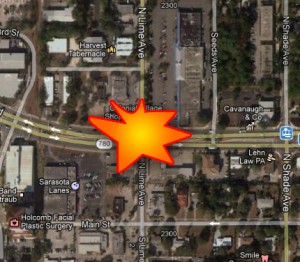 Saturday afternoon a two-vehicle crash at Fruitville Road and Lime Ave. in Sarasota resulted in two children and three adults being taken to area hospitals for medical treatment.

Sarasota Police indicated the accident was caused when at around 12:30p.m. a motorist ran a red light.

Both the Sarasota County EMS and Sarasota County Fire Department responded to the rash which blocked traffic on Fruitville for an hour before wrecker crews cleared away the stricken vehicles.

The resulting damage to vehicles was so sever that responders had to cut the doors and roof off of the car to safely remove the victims. The two vehicles involved in the crash were a white sedan and a blue sport utility vehicle.

Responders took the driver of the SUV to the hospital as well. Fortunately all of the car accident victims appear to be in stable condition. Police have indicated an investigation in the accident is ongoing.