Bicyclist from Bradenton In Critical After Being Hit By Car

Bicyclist from Bradenton In Critical After Being Hit By Car 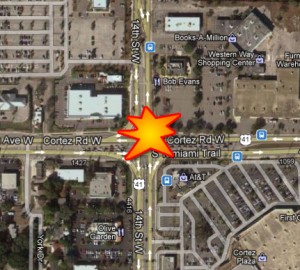 Florida Highway Patrol reported that a man from Bradenton was struck by a car Wednesday morning landing him in critical medical condition.

The Bicyclist, Mark Saba a  44 year old from Bradenton was rushed to Blake Medical Center in critical medical condition.

FHP stated the accident occurred after 7:00 am as Saba who was riding his bike without wearing a helmet was cycling towards route 41 on Cortez Road. At the same time the driver of a Ford F-150 pick up truck, Jonny Anderson a 42 year-old was on 41 driving towards the intersection at Cortez Rd.

Apparently the Bicyclist did not spot the oncoming pick up truck and the two collided.