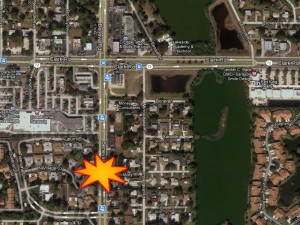 Police have charged William Duling an 83 year old with the accident and allegedly driving while intoxicated.

The accident happened on Beneva road at Mary Lane in Sarasota when Duling, driving southbound in his 05 Corvette, turned left directly in front of two oncoming motorcycles .

Michael Cannello a 53 yeaar old from Nokomis was riding his 2012 Harley Davidson when Duling pulled in front of him. Cannello collided with the rear of the Corvette. John Neel a 42 year old from Sarasota was riding his Kawasaki Ninja and swirved to the right to avoid crashing into Duling’s Corvette.

The force of the impace turned both motorcycles onto their sides and both Cannello and Neel were taken to Blake Medical Center in serious condition.

A passenger on Cannellos motorcycle, Julie Gordon a 40 year old from Sarasota was brought to Sarasota Memorial also in serious condition.

None of the motorcyclists were wearing helmets and FHP has charged Duling, who was riving uninsured, with Driving Under The Influence causing serious bodily injury and property damage.