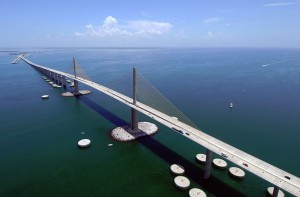 Witnesses stated the driver of a pickup truck was driving recklessly and collided with a concrete wall and a Subaru SUV on the Sunshine Skyway before fleeing the scene.

The driver of the Subaru Forester SUV, Ramon Munoz a 40 year old from Tampa gave the following account to FHP troopers after the incident.  Mr Munoz was driving south in the right lane of the skyway when a small white pickup truck driving next to his vehicle was moving erratically and lost control. The pickup truck swirved into the center concrete wall and then back the other direction crashing into the rear of the SUV. The white pickup then sped away.

A toll-taker at the end of the bridge attempted to record the license plate number of the pickup truck but was unable to record the number accurately.

Witnesses stated the truck was a small white pickup being driven by a white male.

FHP has asked anyone with knowledge of the accident to contact Trooper Barbara Ehrhart at 941-751-8350.