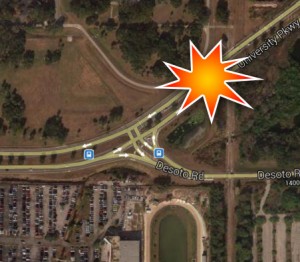 Sarasota Police reported that 3 people were injured and one person was killed during a car accident on University Parkway Sunday.

The accident occurred  close to the Sarasota Kennel Club and the intersection of Desoto Road and University Parkway.

Accounts from the police report stated the fatal car crash happened at ten minutes before 7p.m. when an SUV was struck violently by a sedan after the sedan apparently lost control and crashed into a tree and crossed the median.

There were three passengers in the SUV and they were taken to area hospitals for medical treatment. The driver of the sedan was killed in the crash.

No further details are available as of yet