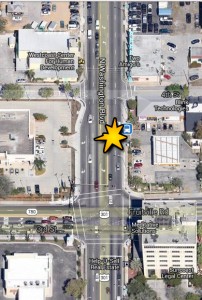 The victim had been life-flighted to Blake Medical Center for emergency treatment. Police has as of yet not released further details of the motorcyclist’s injuries.

According to Sarasota Police the accident happened at 7:15 when John Hart, a 57 year-old from Sarasota was heading north on U.S. 301 when a gold colored sedan from the south bound lanes attempted to turn into a parking lot, but failed to see Hart on his motorcycle.

The  sedan drove directly into the path of Hart causing him to crash into the passenger side of the car.

John Hart, 57, of Sarasota suffered serious injuries and was flown by helicopter to Blake Medical Center for treatment, according to the Sarasota Police Department.

The blockage on U.S.301 is not expected to be cleared until sometime after 8:15