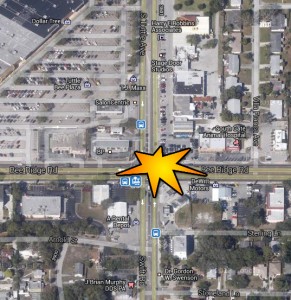 FHP gave the following details of the accident, at around 3:15 p.m. a 2011 Suzuki motorcycle ridden by 26 year old Michael Hicks was traveling north on Swift road and according to witness statements, ran a red light at Bee Ridge Road.

A Dodge Dakota SUV was heading into the same intersection and crashed into Hicks.

James McFarland, a 33 year old from Sarasota, was OK but his passenger was taken to Sarasota Memorial for treatment of minor injuries.
Apparently Hicks was not wearing a helmet during the accident and later died from his injuries at Blake Medical Center in Bradenton.

Lanes at the intersection of Tuttle/Swift and Bee ridge were closed until 5p.m. while the crash was investigated.