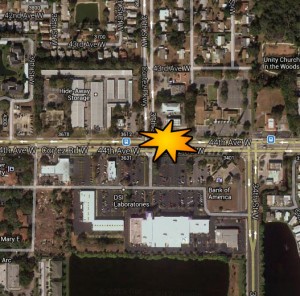 Florida Highway Patrol have reported an accident on Cortez Road has resulted in a man from Palmetto being critically injured and taken to Blake medical center for treatment.

The accident happened when Aaron Hill a 23-year old was riding a scooter down Cortez Road heading west when he crashed into a car.

A 23-year-old Palmetto man suffered critical injuries late Wednesday when the scooter he was riding collided with a car on Cortez Road in Manatee County, authorities said.

The Car, a 2008 Nissan Versa was from the east bound lanes and waiting in the turn lane when Hill also entered the turn lane and collided with the Nissan.

The accident took place at the intersection of Cortez road and 37th Street West a few minutes after 9:30 p.m. The driver of the car, Jason Anziano, a 29 year old from Bradenton, was not injured ion the crash.

Aaron R. Hill was transported to Blake Medical Center for treatment following the crash, which occurred shortly after 9:30 p.m., according to the Florida Highway Patrol.