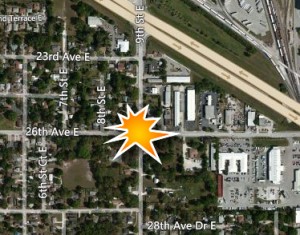 The driver of an SUV who fled the scene of an early morning accident is being sought by the Florida Highway Patrol.

The report stated that at 6:25 a.m. a Nissan Pathfinder was traveling north on 9th Street East  when at the 26th Avenue East intersection a Ford Explorer turned directly into the path of the Nissan. The driver of the Pathfinder swerved to avoid colliding with the Ford, but was stuck in the left side but the Explorer causing it to crash into a utility pole.

Witnesses stated that the Ford failed to yield the right of way , and described the Explorer as being a dark color.

Daryl Dafonia Harvey, a 28 year old and Marianne Harvey a 25 year old both from Bradenton were wearing safety belts and not harmed in the crash.

Troopers have asked anyone with knowledge of the accident contact the Florida Highway Patrol at 239-938-1800.