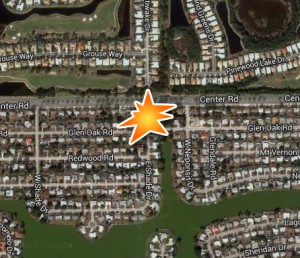 A woman riding a bicycle in Venice Oak Road collided with a towed 20-foot metal trailer at East Shade Avenue.

The accident happened shortly after 1:00 in the afternoon, when both the bicyclist and the driver of the vehicle pulling the trailer where heading east on Glen Oak. The force of the impact through the woman head first into the asphalt causing serious injuries.

The unconscious woman was taken by helicopter to Blake Medical Center for emergency treatment. Witnesses described the trailer as a 20-foot “caged brush” trailer.

Authorities were seen taking blood samples to test for intoxication, but police have not released the identity of the woman.