Eleven Vehicles Crash on I-75 at Brandon Injuring Seven

Eleven Vehicles Crash on I-75 at Brandon Injuring Seven 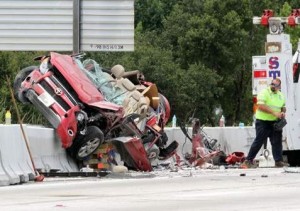 An 11 car pile up on I-75 near Brandon Saturday Morning involved a semi-truck and 10 other vehicles began when an out of state driver changed lanes an cut off the tractor trailer.

William Morton-Holcomb, a 33 year old from Peoria, Ariz. was driving southbound on I-75 near Brandon in his Chevrolet Traverse when he improperly changed lanes directly in front of an oncoming semi.

That set off a chain of events that would cause 11 vehicles to collide and leave 7 people injured, including one person who had to extracted from a car pinned between a barrier wall and a semi truck.

The accident took place just north of north of SR 60 near Brandon and due to the number of vehicles involved completely blocked the southbound lanes.

In the moments after the accident people got out of their vehicles to aid the injured. Hillsborough County Fire Rescue reported that seven people were taken to area hospitals by ambulance and helicopter, including Jeffery Brooks, from Tobyhanna, PA.  and James Lee, from Seffner FL who were listed in critical condition.Both men were later reported to be in stable condition by evening.

Additionally Norma Lee and Donna Lee also from Seffner were among four others seriously injured in the crash.