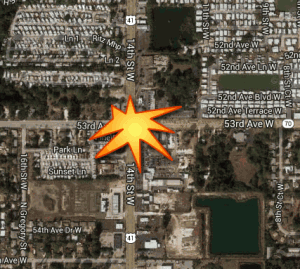 The accident occurred when Travis Podgis a 28 year old from Warner, N.H., was riding east on 53rd Ave West on a 2000 Harley-Davidson XL 883 approaching US 41 when a 2005 GMC 1500 pickup truck heading north, turned left from 41 directly into his path. Podgis attempted to avoid the collision by laying the motorcycle down but crashed into the pickup truck.

Podgis – not wearing a helmet at the time of the accident was taken to Blake Medical Center where he was pronounced dead.

The driver of the truck, Andrew Crone, a 26 year old from Bradenton turned left through a yellow light onto 53rd Ave. West and directly into the path of the motorcyclist.

Florida Highway Patrol stated that charges were pending for Crone.