Passengers Miraculously Uninjured After I-75 Roll Over

Passengers Miraculously Uninjured After I-75 Roll Over 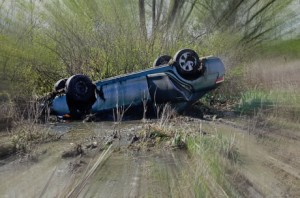 Florida Highway Patrol reported a group of five from Piqua, Ohio was traveling on I-75 in North Port when their car swerved off the road and rolled over multiple times Sunday night.

FHP stated the crash occurred at 9.pm. Sunday when the five were traveling east on I-75.  The driver of the car, Justin Ramon 17 year old, began to change lanes from the right lane to the left to avoid  slower traffic.  While Ramon attempted to change lanes he nearly drove into a car coming up the middle lane in the blind spot and swerved sharply back to the right to avoid a collision. Ramon over compensated causing the Ford Focus to overturn and rollover multiple times, crash through a fence and land in a canal.

Amazingly eveb the driver of the car who was not wearing his seat belt escaped the dramatic crash with only minor injuries – though he will not escape being sited by the Florida Highway Patrol for careless driving.