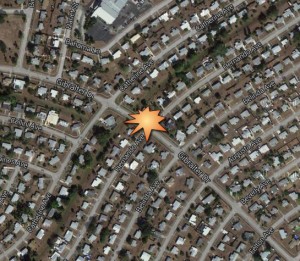 Florida Highway Patrol  reported a man from Fort Myers was struck by  a car while riding a bicycle.

The accident happened at 12:50 a.m. when a car traveling westbound on  Gibralter Drive near Hernando Ave hit a man riding a bicycle from behind.

The bicyclist, David Beck, a 45 year old from Fort Myers was throttled into the road. The driver of the car veered away to avoid running Beck over but continued on without stopping.

Beck was critically injured in the crash had to be flown to Lee Memorial Hospital for treatment.

Later police announced they may have identified a suspect. FHP stated that Jessica Sawyer, a 25 year old from Port Charlotte was possibly driving the 2005 Chrysler that struck Beck.

However the investigation is ongoing and Trooper Jeffery Hause has asked anyone with knowledge of the incident to contact him at 239-344-1730, Ext. 1156.