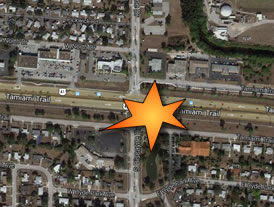 A motorcyclist crashed into a Humvee Tuesday afternoon. The accident happened when the driver of the Hummer, Holly Haynes, a 44 year old from Placida, was driving south on Tamiami Trail towards Biscayne Drive when she abruptly slowed to turn into the Shell Gas Station.

The motorcyclist, Michael Lee Murphy a 61 year old from North Port was following Haynes when she abruptly slowed to turn into the gas station. Murphy braked hard to avoid crashing into the SUV but skidded more than 50 feet before slamming into the back of the Hummer.

After impacting with the Hummer, Murphy was thrown onto the roadway where he slid on the asphalt before coming to a stop.

Offices stated that Murphy was not wearing a helmet at the time of the accident and suffered serious head injuries from the crash.