A serious accident on U.S. 41 involving three vehicles including a semi-truck injured at least one, and blocked morning rush hour traffic. 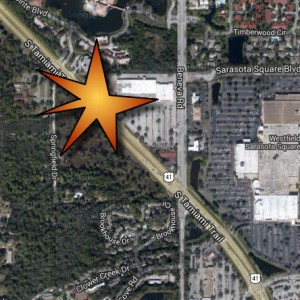 Debris from the crash included the axle from a tractor-trailer which had completely separated from the trailer and parts from a seriously damaged SUV and other cars blocked the lanes until investigators and crews cleared the roadway. The crash up morning traffic for more than a mile before the wrecked vehicles were cleared away.

Florida Highway patrol reported that the crash took place this morning approximately at 8:15 a.m. just north of Vamo road in Sarasota. While the accident is still under investigation some details have been released. A woman was seriously injured during the crash and was flown to Blake Medical Center in Bradenton in unknown condition.

The injured woman’s identity has not yet been released. A wrecked SUV ended up facing south on the grass median while a car, also severely damaged came to rest in the southbound lanes facing south, several hundred feet away.

A woman was evacuated by helicopter after a three-vehicle wreck on U.S. 41 this morning, which involved a tractor-trailer.