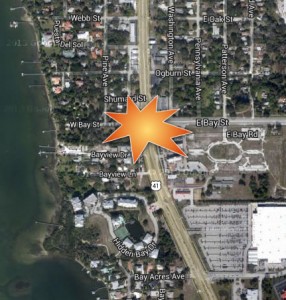 A man from Sarasota was struck by a Chevy Blazer when attempting to cross U.S. 41 in Osprey.

According to Florida Highway patrol the man, fifty two year old Jody Gregory from Sarasota was hit when he road his bicycle into the intersection of East Bay Street and U.S. Tamiami Trail late Wednesday night.

Gregory, went through a red light heading west and rode directly into the path of the oncoming SUV, a 2004 Chevy Blazer that was traveling north.

The driver of the SUV did not have time to avoid crashing into Gregory. The force of the collision threw Gregory from his bicycle into the roadway.

Gregory was critically injured in the accident and was flown by helicopter to Blake Medical Center in Bradenton Florida .

Florida Highway patrol stated that while the investigation was still in progress, chargers were likely pending.