An as of yet to be identified woman suffered minor injuries when her car lost control and crashed off the road into Hudson bayou. 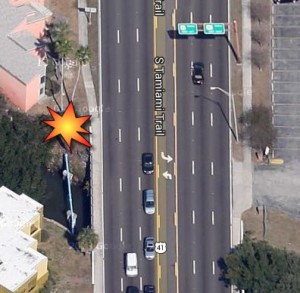 Witnesses reported seeing the car swerving back an forth as the car traveled south on U.S. 41 near downtown Sarasota. For reasons not yet announced by officials the car to one final sharp turn and hurtled off the road just before the bridge over Hudson Bayou where the car crashed through bushes crashed into a large water main and plunged down into the shallow water just south of high Point Dr. The force of the impact deployed the cars airbags and threw open the trunk.

Cleanup of the crash forced the closure of the right lane on southbound U.S. 41 for more than an two hours as tow truck crews struggled to pull the car out of the canal without damaging the the water main. As a result traffic was seriously backed up on U.S. 41 with rubber-necking also slowing down the northbound sides.

Sarasota police stated that the driver of the car may face charges of reckless driving and the accident is still under investigation.