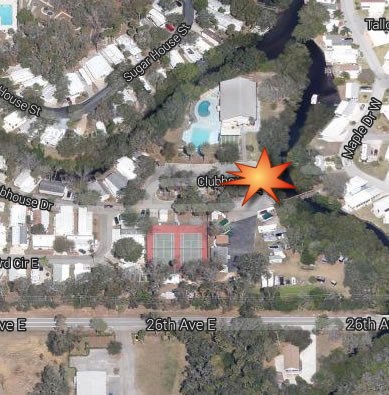 Three people were killed, and five people injured Sunday from an accident at the Sugar Creek Country Club in east Bradenton.

The accident occurred at 11a.m. February 2nd in the parking lot of the Sugar Creek Country Club, an over 55 residential community.

Residents of Sugar Creek use the clubhouse as a church Sundays, and had begun to gather and socialize in the parking lot outside after services had concluded. Shortly after 11a.m. the driver of a 2009 Chevrolet Tahoe SUV attempting to back out of a parking space in front of the clubhouse apparently lost control of the vehicle and accelerated sharply in reverse across the parking lot.

As the SUV speed in reverse across the lot it slammed into the crowd of churchgoers running over several people before crashing through shrubs and trees and plunging into a lake. The SUV finally stopped after being in several feet of water on the embankment.

Three people were killed and four others suffered serious injures from the impact.

Nellie Vlasma and Nelly Deporter were taken to Blake Medical Center for treatment and Michael Claus and Fred Eringa were brought to Manatee Memorial Hospital.