The crash took place very early Sunday just prior to three in the morning. While closing on  the intersection of 46th Avenue and 30th St. West,  twenty nine year old Gaston Hernan from Bradenton,  in his Full-sized SUV Nissan Armada, the road curved to the right but failed to negotiate the turn. 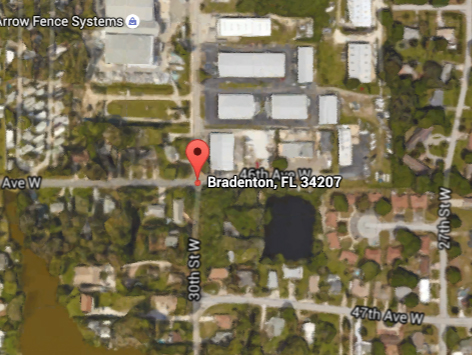 Hernan was northbound and apparently crossed into the southbound lanes while attempting to negotiate the turn. As the SUV swerved across the lane into the west side of the road it struck a tree at speed. The force of the crash caused the full-sized Nissan Armada to overturn and momentum carried the heavy SUV into a parking lot.

As the SUV tumbled into the parking lot it crashed into a pair of pedestrians before colliding with a parked car.  The SUV hit the parked car with enough force to smash the car into two more vehicles in the parking lot before the SUV finally came to rest.

The impact pushed all three of the parked vehicles into a building on the other side of the parking lot.

Hernan, the driver of the SUV as well as a passenger, twenty one year old Marco Garcia from Bradenton died from injuries sustained in the crash. The other passengers in the Nissan SUV, twenty six year old Julio De La Torre and thirty seven year old Roberto Villalta Mejia also suffered serious injuries and were taken to Blake Medical Center.